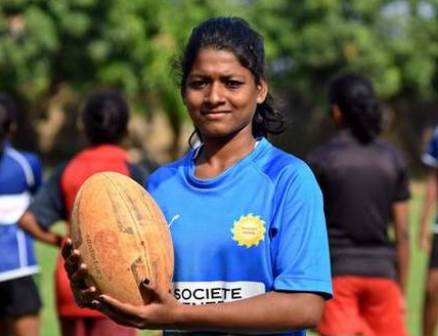 Bhubaneswar: In a matter of great joy and pride for Odisha, Sumitra Nayak from Kalinga Institute of Social Sciences (KISS) has been nominated for the 2017 International Children’s Peace Prize- along with nine others.

The nominees of 2017 exhibit the quality of being changemakers. The Kids Rights Foundation will award the International Children’s Peace Prize 2017 on Dec 4, 2017.

Sumitra, a rugby player from KISS, has been nominated for her unbending attitude towards troubles. Despite all odds, she became an inspiration for others and last year was invited to deliver a Ted Talk in Pune and was introduced as a ‘dreamer, achiever and a trend setter.’

She was born in Odisha’s Jajpur district and lived under abject poverty, barely surviving on two-square meals a day. Her father, a drunkard, used to return home late and often abuse the mother and beat her. When she could not bear any more, she brought Sumitra and her siblings to the State capital. Sumitra was only four years old at that time.

In a new city, with a lifestyle much different than in her village, Sumitra’s mother Gayatri, initially struggled for a job. Unable to find any, she was forced to work as a maid for long hours, in order to provide basic facilities to her children.

While working at one of the houses, Gayatri learnt about KISS, founded by Dr. Achyuta Samanta, and enrolled Sumitra in 2008.

Sumitra was instantly drawn to a ‘strange game,’ which her friends informed was called ‘rugby,’ and soon the girl from the slums became interested in the game and started to practice in 2009.

In 2012, she played her first State match. Two years later, she participated in the U-13 Women’s Rugby World Cup, followed by the National Championship and the National School Games. She helped her team clinch bronze medal in the Asian Girls Rugby Sevens (U-18) held in Dubai last year.

Nayak, a +3 first year student, has been training her juniors since the Touraid Under 13 Girls International Rugby Tournament in London where she led the team to victory.

Reacting over the nomination for the International Children’s Peace Prize, the jubilant KISS student said, “I am extremely happy to know about it. All credit goes to Dr. Samanta Sir who has changed by life. My vision is where every child grows up to be a change-maker and continuously aims to solve problems around them and gets to build empathy as a skill. This will change the world!”

With inputs from Tazeen Qureshy