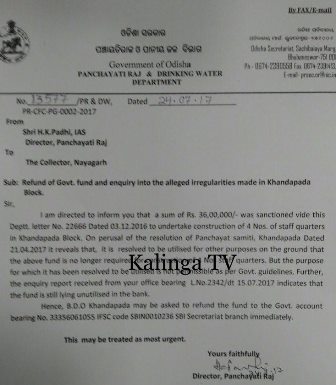 Bhubaneswar: The state government on Tuesday directed Khandapada BDO in Nayagarh district to refund Rs 36 lakh spent on construction of four staff quarters in the block to the account of the state government saying the fund was not used for the purpose it had been sanctioned.

Panchayati Raj Department Director HK. Padhi wrote a letter to the Nayagarh Collector directing him to ask the BDO to refund the money as it has been spent for a purpose other than the one for which it had been sanctioned in violation of government guidelines.

“A sum of Rs 36 lakh was sanctioned to undertake construction of four staff quarters in Khandapada Block. However, the fund was utilized for different purpose which is violation of the government guidelines.  The money should be refunded to the government account as there is no need of constructing the staff quarters anymore,” said Padhi in the letter.

The Panchayati Raj Department Director also directed the district collector to enquire into the alleged irregularity.