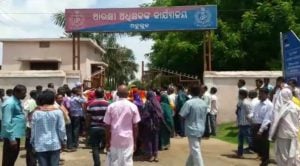 Angul: In the second case of a Kangaroo court punishing a man in Angul district in the last one week, a resident of Jukubu village under Jarapada police limits was asked to leave the village as punishment over an issue related to the last panchayat polls.

The victim, Gagan Bihari Das, lodged a complaint in this regard with the superintendent of police (SP), Angul on Tuesday.

In his complaint, Das stated that he was assigned to work as a polling agent of the ruling BJD at his village booth during the panchyat polls in February 2017.

But people from opposition parties complained about his candidature for the assigned duty which soon turned into an ugly fight among the villagers dividing the village into two groups, he mentioned.

In order to end the tension among the people, the village kangaroo court handed out a bizarre punishment asking Das to leave the village forever.

Around a hundred of people from the opposite party today met the Angul SP, and lodged a separate complaint against Das. They said Das had registered a false allegation against the villagers.

The opposition group also alleged that Das is an insolvent person. He takes money from the villagers as loan but never returns the amount.

Investigation in this case is going on and truth will come out soon, said the police.

Last week, a man in the same district was forced by a kangaroo court to go around the village beating a gong as punishment for not voting for a particular candidate for the post of naib sarpanch.