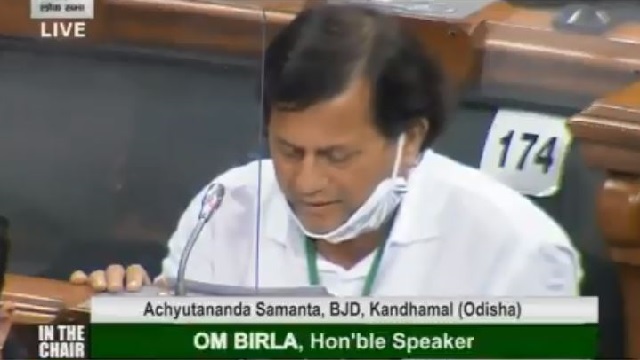 While placing the demand, the Parliamentarian said, “We all know that Odisha is the most disaster and cyclone prone state in the country. In the last 100 years, over 260 cyclonic disturbances had their landfall along the Odisha coasts. The major cyclones that have hit the State in the last two decades are the 1999 super cyclone, Phailin, Hud Hud, Titli and also Fani. Besides, it is also prone to floods and draught.”

“Odisha, under the leadership of honourable Chief Minister Shri Naveen Patnaik has been hailed for its disaster management strategy and plans worldwide including the UN and the World Bank,” he added.

He further said that Odisha efforts at a well-targeted evacuation plan which has involved moving more than one million into storm centres during Fani has been applauded worldwide adding Odisha has performed well in the various parameters including risk minimization, response, rehabilitation and recovery but the long term infrastructure which is disaster resilient still grey area considering the reoccurring nature of the cyclones.

The Kandhamal MP said, “Through you sir, we request honourable Ministers of Home Affairs and Finance and place our request to provide Odisha with a special funds for building long-term disaster resilient infrastructure to minimize the need of the evacuation but also save systematic investment that are made when household assets are lost during a disaster as recovery.”

“Our honourable Chief Minister, Odisha also has sought a long-term package of around 20,000 crore from the centre to build disaster resilient infrastructure in energy and coastal embracement,” he conclude.

Raised a demand for funds for building long term disaster-resilient infrastructure in Odisha during the Zero Hour in Lok Sabha late last night. Great experience to be in the house till midnight. Watch.#ASinLS pic.twitter.com/r9BIWHrLmR