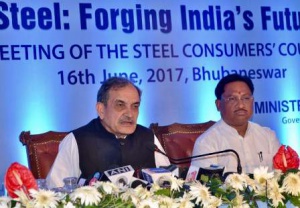 Bhubaneswar: Kalinganagar plant in Odisha’s Jajpur district has the capacity of adding of up to 20 per cent of the total steel production in the country, Union Steel Minister Choudhary Birender Singh said at a press meet organized at the sidelines of Steel Consumers’ Council.

Going by the current calculation, the Centre has set a target of 2030 to boost the production of steel to 300 mega tonnes.

“We have set a target of producing 300 metric tonnes steel by 2030. Kalinganagar plant in Odisha has the potential to produce 20 per cent of the total steel, ” said the Union Minister.

Talking about the mining sector in Odisha he said, “Odisha is perhaps the only state which is blessed with all kinds of minerals. In fact, there is every chance of creating a steel hub in Kalinganagar. ”

On POSCO project, the Minister took a jibe at the State Government.

“You all know what happened regarding POSCO. The State delayed the reforms in land acquisition process. We welcome plants with 100 per cent FDI to be set up,” Singh said.