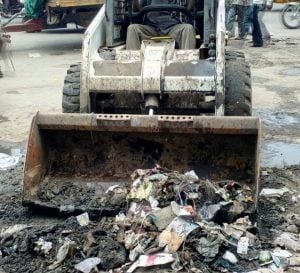 Cuttack: Governance through Social Media no longer remains a myth, which was proved yet again today with the Badambadi Bus Stand episode in Cuttack, thanks to Health Minister Pratap Jena & Khadi Board Chairman Tejeswar Parida.

It all started when Bikash Swain, a youth from Jagatsinghpur, was shocked to see the pitiable condition of Badambadi Bus Stand when he arrived at Cuttack from his workplace in Dhanbad.

Bikash immediately captured the unhygienic and dirty conditions at Badambadi and shared the video and photos on Twitter. Health Minister Pratap Jena responded and promised action. However, the lacklustre approach of authorities continued.

Upset over the apathy of the officials to a matter of urgency, Bikash approached the Social Media cell of Kalinga TV, which took up the issue with the Health Minister & others and lamented poor response from the authorities.

Horrible sight from #Badambadi Bus Stand in #Cuttack . Situation remains same even 3 days after the Complaint lodged by @bikashchandras . pic.twitter.com/98k0WZ7s22

Health Minister Pratap Jena responded immediately asking the officials to act or face strong action. Khadi Board Chairman Tejeswar Parida too noticed Kalinga TV’s tweet and had a talk to the CMC Commissioner.

Thanks CMC Commissioner. As I saw tweet of Kalinga TV, immediately had also spoken to him and he has already started process. @CMO_Odisha

The Cuttack Municipal Corporation (CMC) acted and started the cleaning operation to clear the mess from Badambadi Bus Stand. They tweeted with the following message:

The Twitterrati hailed the ‘Twitter Governance’ calling it the power of New Media, which gives the space to all – whether Govt, Media or Public. Kalinga TV gets kudos from people for taking up the right cause in public interest.

Appreciate the Ethical Journalism of Kalinga TV. Media is the Mirror and Connecting Bridge. Praiseworthy response by Minister Pratap Jena.

Bikash Swain, who fought relentlessly to get things done, thanked everyone for their support. He also received appreciation from Minister Pratap Jena and BJD leader Tejeswar Parida.

This was only possible because of our responsible citizens at cuttack. Looking forward to make Odisha great with proper coordination. https://t.co/YbdMR1dEgb

Bikash, U r a real Active Citizen. Let thousands of youth get inspired by you and we all never forget our social responsibilities!