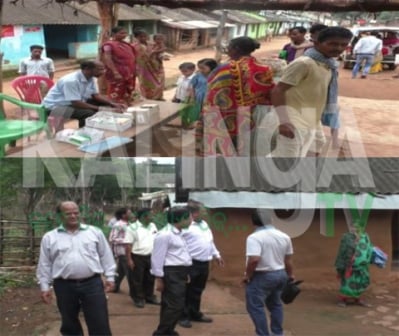 Baliguda: Villagers of Pusangia under Bataguda panchayat of Kandhamal district, who were suffering from an unknown disease for the last three months, received the required medical attention from the district administration on Saturday.

Kalinga TV and its web portal – kalingatv.com – had reported the news on July 13.

A five-member team led by Chief District Medical Officer (CDMO) Swapneswar Gadanayak arrived at the village and took stock of the situation. Besides, they distributed medicines to the affected people.

Health workers also took blood samples of the sick and the drinking water used by the villagers.

The team claimed that the unknown sickness had spread to the entire village as everyone in the village used water from the same water body.

“We came to the village after learning that around 70 people of different ages have been suffering from an unknown disease for the last three months. Using polluted water is the main cause of the disease. We found that the villagers are using water from a water body smaller than a pond for all purposes. Animals are also using the water.  We made the people aware about it and distributed medicines to them,” said the CDMO. 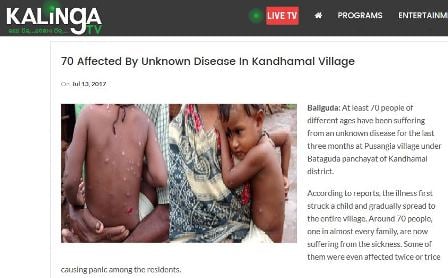 According to the villagers, the illness first struck a child and gradually spread to the entire village. Around 70 people, one in almost every family, are now suffering from the sickness. Some of them were even affected twice or trice causing panic among the residents.

While some of the locals assumed the sickness to be chickenpox, others have been performing pujas considering it to be an act of god’s wrath.

Students block road after teacher is killed by police vehicle