Pavan K. Verma, Rajendra Kishore Panda and Paro Anand to be conferred with the prestigious Kalinga Literary Awards of 2019 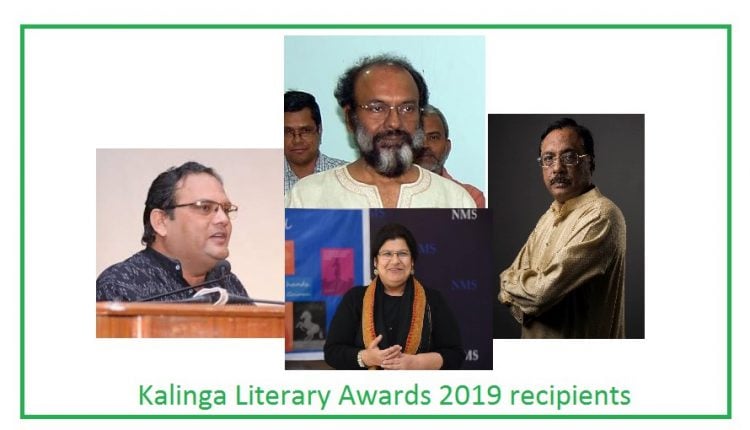 Bhubaneswar:  The Kalinga Literary Awards 2019 is going to kick start from July 19, 2019, in Bhubaneswar. The three-day festival will continue till July 21. In the meanwhile, Kalinga Literary Festival has announced its annual awards to recognize brilliant literary work at different levels. Kalinga Literary Annual Awards have four segments:

More than 250 celebrities from the worlds of literature, cinema, media, and politics will assemble in the temple city of Odisha to deliberate on the Central theme of ‘Gandhi’s Idea of India: Truth, Non-Violence, Harmony”, at the Kalinga Literature Festival. The event will be held at KIIT Convention Centre in the capital city.

Kalinga Literary Festival (KLF) has emerged as one of the leading literary platforms in India, attracting both experienced and young litterateurs.

Bigger than ever before, the sixth edition of the festival will bring nationally and internationally acclaimed names on one platform to discuss, debate and explore commonalities in the diverse voices in literature, justice, equality, equity, and humanity.

“After the blistering heat of the Indian Summer, it’s refreshing to welcome the monsoon rains, and along with it, the KLF. Poet Kalidasa would have been pleased,” said KLF Founder and Director Mr. Rashmi Ranjan Parida.

Born on June 24, 1944, Rajendra Kishore Panda is a major poet in Odia literature. He was born in Natasha, a village in the undivided Sambalpur district of Odisha. His family was one of the 22000 families that faced the trauma of displacement when 285 villages were submerged under the waters of the Hirakud dam project in 1956-57. He holds a Master degree in Arts from Allahabad University. He worked in the Indian Administrative Service from 1967 to 2004.

Panda’s poems got published in state-level journals while he was still in the school. He is the author of twenty books of poetry and a novel. He also edited several Web anthologies of poetry including Kavitayana and Barnamala.

Writer-diplomat Pavan K. Varma is a graduate in History from St. Stephens College (securing the first position in the College), after which he took a degree in Law from the University of Delhi. He joined the Indian Foreign Service in 1976.

A writer of depth and insight, he has written over a dozen best selling, books including the highly successful Krishna: The Playful Divine (Penguin) on India’s most popular deity, the critically applauded biography of the Urdu poet Mirza Ghalib, Ghalib: The Man, The Times (Penguin), and the Havelis of Old Delhi. Mr. Varma’s book, ‘Adi Shankaracharya: Hinduism’s Greatest Thinker’ (Westland-Amazon)’, was launched in April 2018.

The Kalinga International Literary Award is conferred upon someone who has made a global impact through his/her work and writing. This award is specifically given to someone who has worked in a language other than Odia.

Pavan K. Varma through his writings has inspired many in India and abroad. The award recognized his unique and exceptional contribution promote to Indian literary on the global stage.

Paro Anand has been writing for children and young people for over 30 years and has published 26 books, including novels, short story collections, plays, picture books, a teacher’s guide and, most recently, a graphic novel.

Paro runs Literature In Action, a programme using literature as a constructive and creative outlet. She is the recipient of numerous awards, including the 2017 Sahitya Akademi Bal Sahitya Puraskar for her book Wild Child, now published as Like Smoke. She is a world record holder for helping over 3,000 children make the world’s longest newspaper.

Two collections of prose; Vag Bishesha and Shesha Sparsha, three books in English; Kandhamal Riot and Mass Media, Bhima Bhoi; Verses from the Void and Popular Religion and Ascetic Practices (co-authored) and his works are widely translated into English, German, Hindi, Bengali, Assamese, Malayalam, Nepali and Irish. Presently he is a member of the editorial board of The Nartanam, a dance journal published from Hyderabad.

Also a renowned scriptwriter for Odissi dance performances presently he is working as the Editor of ‘The Samikhsya’ and is the Chief Editor of ‘Jharka’.