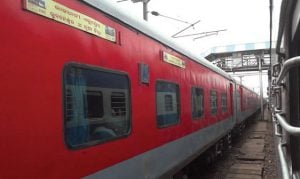 New Delhi: At least three Odisha bound trains, including Rajdhani Express running from New Delhi, have been diverted following the derailment of the Azamgarh-Delhi Kaifiyat Express in Auraiya district of Uttar Pradesh on Wednesday.

The engine and nine coaches of Kaifiyat Express, travelling from Azamgarh to New Delhi, derailed near Auraiyya district of Uttar Pradesh at around 2. 50 am on Wednesday after its engine reportedly collided with a dumper. As many as 50 people are reported to have been injured.

According to a press release issued by East Coast Railways, New Delhi-Bhubaneswar Rajdhani Express leaving New Delhi on August 22 will run via Kanpur-Lucknow-Moradabad-Ghaziabad,

This is the second rail accident since last Saturday when Utkal Express had derailed in Muzaffarnagar distict of UP, killing 22 people and injuring 156.