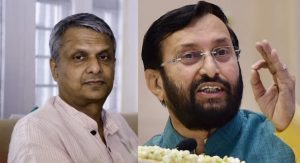 Bhubaneswar: Senior BJP leader and Union HRD Minister Prakash Javadekar on Tuesday took a dig at BJD MP from Dhenkanal Tathagata Satpathy, who had resorted to a unique way to protest what he called the ‘imposition of Hindi’ by replying in Odia to Union minister Narendra Singh Tomar’s letter written in Hindi, asking him to first write a letter in Odia to the non-Odia speaking Chief Minister of the state.

Javadekar, who arrived in Odisha to attend the convocation of Sri Sri University and party executive meet, said; “It would have been better if he wrote in Odia to Naveen Patnaik, who cannot speak his mother-tongue and the language of Odisha even after being the Chief Minister of the state for 17 long years,” Javadekar told media persons here today.

The language controversy began on Friday when Tathagata tweeted the Union minister’s letter, adding: “Why are Union Ministers forcing Hindi on non-Hindi speaking Indians? Is this an attack on other languages?”

Tomar had written to Tathagata on August 11, inviting him to attend a district-level event on the ‘India 2022’ vision.