Janmashtami celebrated with fervour across Odisha 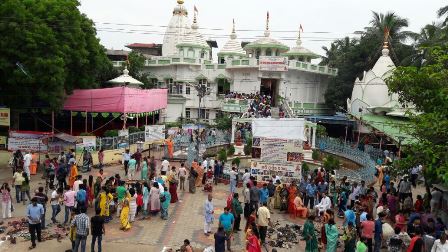 Bhubaneswar: Janmashtami, the birthday of Lord Krisna, the eighth incarnation of Vishnu, is being celebrated  amid religious fervour across the state.

Thousands of devotees gathered at temples across the state to have a glimpse of Lord Krishna on this auspicious occasion.

Krishna devotees celebrate Janmashtami by fasting, singing, praying together, preparing and sharing special food, night vigils and visiting Krishna or Vishnu temples. Major Krishna temples organize recitation of Bhagavata Purana and Bhagavad Gita. Many communities organize dance-drama events called Rasa Lila or Krishna Lila.  At midnight, an idol of infant Bal Gopal (child Krishna) is bathed, dressed up and put in a cradle which is swung by the faithful with utmost devotion.

In Bhubaneswar, devotees made a beeline for the ISKON temple and Ram Mandir for the mega celebration.

Seventeen platoons of police, including central forces, have been deployed at different places of Kandhamal district to avoid any possible untoward incident on the occasion of Janmashtami and 9th death anniversary of local VHP leader Swami Laxmanananda Saraswati. Besides, three-layer security arrangements have been made for celebrations at ashrams set up by the Swami near Jalespeta and Chakapada.