Jajpur: A woman and her son from Balichandrapur area in Jajpur district of Odisha were rescued from Sareipali area of Chhattisgarh on Thursday. They were missing from Balichandrapur and an FIR had been lodged in this matter. Father of the woman has alleged that the two had been kidnapped due to property dispute.

As per reports, on October 12 in the afternoon, Subhalaxmi Mishra and her 15 year old minor son from Krushnapur sasana in Jajpur district had gone missing from Balichandrapur bazar.

They were found unconscious in Sareipali area of Chhatishgarh on Thursday. When they were found their heads were tonsured while their faces had been blackened with ink. 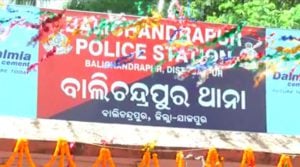 After getting information a team of Balichandrapur Police went to Chhatishgarh and brought them back to Jajpur today.

After the two had gone missing, father of the woman had filed a missing report at Balichandrapur PS. He has alleged that the brother in law of the woman had kidnapped the two due to property dispute. Earlier, husband of the woman had died in a road accident. And since then the woman was living in her father’s house along with her son.

A case has been registered in Balichanrapur Police Station in this connection and further inquiry is underway. We are yet to get reaction of Police in this matter.