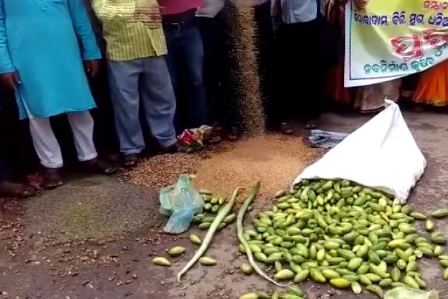 Jajpur: In a bid to draw the attention of the district administration and the state government to the distress sale of crops, hundreds of farmers of the district and outside protested in an innovative way at Chandikhol here on Wednesday.

The peasants gathered in Chandikhol under the banner of Naba Nirman Krushak Sangathan (NNKS) and threw their agricultural produce on the road to vent out their anger and frustration at the inaction of the government.

They threw huge amounts of vegetables, grams, pulses, groundnuts and milk on the road.

“We have been demanding price, prestige and pension for the farmers for the last seven years. But, the state government is not addressing our demands. This year, people do not buy even for Rs 30 the same crops which the farmers sold for more than Rs 100 last year. They bear heavy loss due to the absence of storage facilities and adequate marketimg avenues. The state government should buy the crops with its minimum support price,” said NNKS convener Akshaya Kumar.