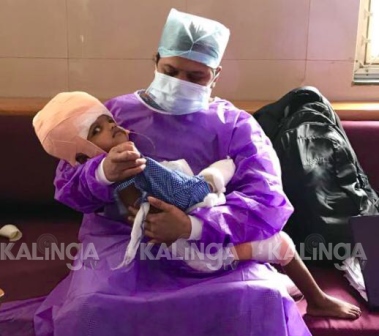 New Delhi/Bhubaneswar: In what could gladden the hearts of uncountable well-wishers of Kandhamal twins Jaga-Balia, Jaga on Tuesday came to his mother’s lap for the first time after surgery at All India Institute of Medical Sciences (AIIMS), New Delhi.

The AIIMS authorities, in a press release informed that Jaga is taking liquid diet orally and was taken out of the room in the corridor today. He also sat in his mother Pushpanjali Kanhara’s lap and looked happy.

The press release further said that Jaga, who was shifted to the general ward from ICU on November 4 after the second phase separation surgery, looked interested in music and was following musical melodies.

On the other hand, Balia is still kept in Neuro ICU and has shown improvement in the form of movement of limbs.  It is likely that he will stay in ICU for long term and his outcome more unpredictable.

Notably, the Jaga-Balia case came to light after Kalinga TV aired a special programme on them in its ‘Kalinga Bandhu’ programme first on November 2016. Following the airing of the programme, Chief Minister Naveen Patnaik took initiative and sanctioned Rs 1 Crore from the CM’s Relief Fund for the twins’ surgery. The first phase of surgery on the twins was carried out on August 28.

The twins were separated after the second phase of surgery on October 25, in which a team of 30 doctors across specialties took part.