Ganjam: An Italian couple adopted an orphan girl, Sneha, from the Utkal Balashram in Berhampur city of Ganjam district in Odisha today.

The Italian couple from Genoa were identified as Nicola Gambaro and Elisa Ubegio.

The couple  took custody of the child after completing necessary formalities in presence of the district collector Vijay Amruta Kulange and District Welfare Officer.

According to reports, Sneha was rescued from an abandoned place on December 4, 2017.

After the rescue, the information was uploaded on the portal site of Central Adoption Center for adoption through the Special Adoption Agency. Later, she was declared free by the Ganjam Child Welfare Committee.

It was informed through the online portal that the child could be adopted by any couple. After three long years, the Italian couple was allowed by Center to adopt Sneha.

Utkal Balashram and the District Child Protection Office prepared the required documents for adoption. The couple decided to physically adopt the baby. 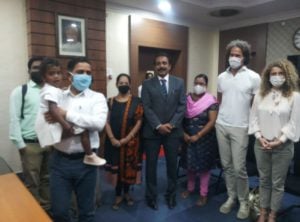 It is to be noted that today, for the third time, an orphan girl has moved abroad as a foster child outside the district.

Earlier, an orphan girl was also adopted from the same orphanage.

Utkal Balashram is the only center in the district in Berhampur, where children are rescued from various parts of the district for their care and protection.

However, the Child Welfare Committee advised the adoptive parents to take special care of proper nutrition, safety and good education.

Cuteness Overloaded! 4-Year-Old Returns Home With “Baby Deer Friend” Whom He Befriended While Playing Outside