Police have also seized cash of worthy around Rs 4 lakh from the gang. Police said that the betting gang has also links with other similar rackets in Calcutta and Mumbai. 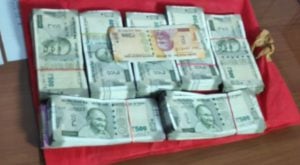 The other four accused arrested have been identified as Manprit Singh, Uttam Sharma, Raju Lodhi and Md Rafique.

Police said that the gang members used to change their hideout frequently to hoodwink the police. “ Further investigation is continuing to identify others who were also involved in the racket,” added the police official.