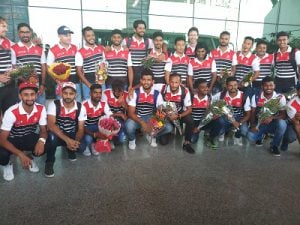 Bhubaneswar: As the countdown for the Hockey World League Final begins, the 18-member squad of the India hockey team touched down in Bhubaneswar on Wednesday.

“We have worked very hard in the camp and will display that on the field. Our first match is against Australia but all the participating teams are equally good,” said skipper Manpreet on his arrival.

On the absence of former skipper Sardar Singh said, “Other players are doing well. We will expect Rupinder to perform well in his position.”

Sjoerd Marijne, who took over as the coach recently said the team is looking forward to face challenges against the world’s best teams.

“The teams participating here are the best ones. All matches are a challenge for us. We have a few young players in the team and it will be a good experience for them,” said Marijne, who assisted the team in clinching gold in his maiden tournament as coach in Asia Cup.

Praising Bhubneswar, the coach said, “Hockey knowledge is good in Bhubaneswar. Stadium is packed so we will get extra energy.”

Hockey World League Finals will begin from December 1. India will play against Australia in their first match.