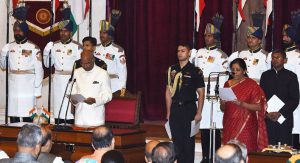 New Delhi: Prime Minister Narendra Modi has taken the country by surprise with his out of the box step of choosing Nirmala Sitharaman as the first full-time woman Defence Minister of the country. Now, the country waits to see the Generals doff their caps to a lady boss!

The Defence ministry is considered one of the heavy weight portfolios in the Cabinet. In assigning her this important portfolio, Modi has sent a clear message that Sitharaman has what it takes to handle the country’s security issues. Finance minister Arun Jaitley was holding additional charge of the portfolio since Manohar Parrikar resigned from the cabinet to take charge as the Chief Minister of Goa. There has been constant talk of the the dire need to have a full-time defence minister since then – and particularly after China started flexing its muscles in Doklam on the China-, India, Bhutan tri-junction. Then there are important decisions that need to be taken for a strategic partnership with the private companies and critical reforms in the sector.

Prior to this, Nirmala served in the commerce ministry with independent charge and proved her competency by doing well in multilateral negotiations.

Nirmala credited her promotion to the party’s leadership and described it as cosmic grace. “Somebody who has come from a small town, grown into the party with all the support of the leadership. And if given such responsibility, it just makes you feel sometimes that cosmic grace is there. Otherwise, it is impossible,” Sitharaman said after taking oath.

The private sector companies have high hopes from the new minister, who could accelerate the government’s ‘Make in India’ programme that could prepare the ground for them to form joint ventures with the ministry to provide defence equipment.

Currently, Hindustan Aeronautics Limited (HAL) is the only state-owned defence manufacturer that dominates the industry. Private defence manufacturers like Larsen and Tubro, Tata Group, Adani Group, Reliance Infrastructure, Mahindra and Mahindra are most likely to benefit from the strategic partnership.

Countering terrorism, tackling China’s belligerence, border disputes, defence modernisation are some of the key issues that Nirmala Sitharaman has to deal with and make critical reforms as the new full-time minister.

Have to prove & perform to satisfy the goals which are expected of me. In all probability, it(taking charge) will be on Sept 6: N Sitharaman pic.twitter.com/17EjjA1UQz