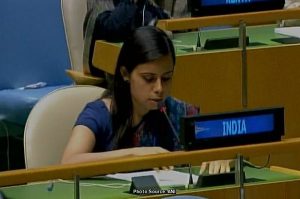 New York : India has described Pakistan as “Terroristan” after Pakistan Prime Minister Shahid Khaqan Abbasi raked up the Kashmir issue and told ‘Islamabad is not prepared to be anyone’s scapegoat’ at the UN General Assembly on Thursday.

First Secretary in the Permanent Mission of India to the UN, Eenam Gambhir, exercising her right of reply at the UN General Assembly said, “Pakistan has become a geography synonymous with terror with a flourishing industry producing and exporting global terrorism. Terroristan is in fact a territory whose contribution to the globalisation of terror is unparalleled.”

The Indian diplomat said, Pakistan’s current state can be gauged from the fact that Hafiz Saeed, a leader of the UN designated terrorist organisation Lashkar-e-Taiba, has now sought to be legitimised as a leader of a political party.

“Pakistan’s counter-terrorism policy is to mainstream and upstream terrorists by either providing safe havens to global terror leaders in its military town, or protecting them with political careers,” she said.

India’s Permanent Representative to the United Nations Syed Akbaruddin also shared India’s stand on Pakistan at the UN General Assembly on his twitter handle. He captioned- Pakistan is now Terroristan “Quest for a land of pure has produced the land of pure terror” – @IndiaUNNewYork replies to Pakistan @UN.

Pakistan is now Terroristan
“Quest for a land of pure has produced the land of pure terror” – @IndiaUNNewYork replies to Pakistan @UN pic.twitter.com/I2n8Nq0d7i

Attacking Pakistan on the Kashmir issue, Gambhir said that the territories of State of Jammu and Kashmir are and will always remain an integral part of lndia. Islamabad will never succeed in undermining India’s territorial integrity despite their best efforts to scale up cross-border terrorism.