Incredible! Watch How This Little Boy Sings Classical Song To The Tunes Of The Harmonium; Videos Become Viral 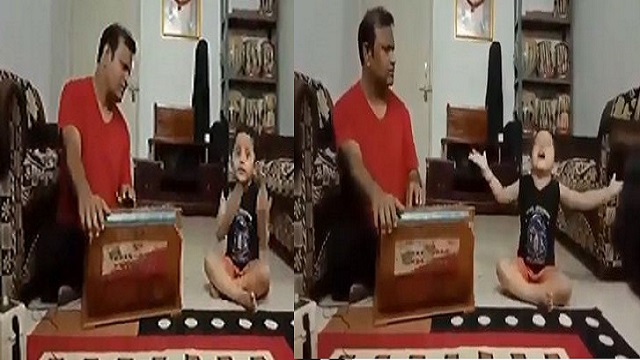 Every day different kinds of videos are going viral on different social media sites. Such video, be it be that of animals, reptiles, small children, adults even that of men and women, are highly loved, enjoyed and shared by people. Several videos of a little boy singing a classical song to the tunes of the harmonium, played reportedly by his father, are doing round on the social media today.

At least three videos, which have been shared by Journalist Sandhya on her Twitter handle, of the boy and his father crooned a classical song.

When his father is seen playing the harmonium, the child perfecting his sur and taal. Sometimes he ask his father to slow down when he sings fast.

Several people, while commenting on the video, also highly appreciated the boy’s voice.

“This is precious, so precious,” said Kusha Kapila.

“This is so great. Natya Sangit is one of the most difficult form of music due the lyrics and all the classical base. This guy is singing so effortlessly. And yes no chill!!!,” said another Twitter user KCT.

Little fella has no chill pic.twitter.com/ytp2q5PvbT

Send WhatsApp message to more than 200 people on festival, know what is trick