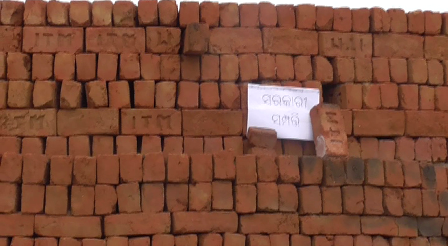 Gunupur: Tightening the noose around illegal traders in Gunupur sub-division of Rayagada, the district administration raided an illegal brick kiln in Gadi Akhala panchayat and seized bricks worth lakhs of rupees on Tuesday.

Reports say, based n a tip-off on the brick-kiln owned by Ramnath Panda in the Narasinghmunda Mouza, Gunupur Tehsildar Akshamita Kartik conducted a raid on the unit today morning and seized around six lakh bricks. Sealing the bricks production unit, the Tehsildar also slapped a fine of Rs 80,000 on Panda.

“We had information on the illegal brick production unit operating in the Narasinghamunda Mouza for the last few months. We conducted a raid on the unit with the help of the local police today morning and found roughly six lakh pieces of bricks, worth Rs 70,000 in royalty, kept inside it. We have sealed the unit and slapped a fine on the owner,” said Kartik.

The Tehsildar informed that such raids would continue in the area in the coming days to keep a tab on the flourishing illegal trade.