Bhubaneswar: The Surya Kiran aerobatic demonstration team of Indian Air Force (IAF) has exhibited a daredevil show in Bhubaneswar skies over the Kuakhai river bed in Odisha on Friday.

Thousands of people from the twin cities of Cuttack and Bhubaneswar and nearby areas witnessed the spectacular air show exhibited by pilots of nine Hawk 132 Aircrafts manufactured by the Hindustan Aeronautics Ltd (HAL).

The entire team divided into two groups and exhibited a series of loops, barrel rolls and manoeuvres in the air.

The Governor said that the air show gives a clear message to the world that India’s survival is must if the world has to survive. “It also shows how the sky and earth can meet each other,” he said. 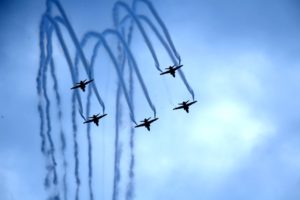 The air show was organised to commemorate the 75 years of India’s independence and “to inspire and encourage the youths to join the Indian Airforce”, said Patnaik. As part of the Azadi Ka Amrit Mahotsav, such shows are being organised at various places across the country. The first show was conducted here in Bhubaneswar, he added. 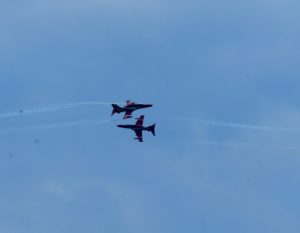 “For the first time in my life I saw the fabulous show by our IAF pilots. I salute them and their courage. Seeing their performance, I am sure that we are fully secured,” said Pratima Sahoo, a visitor. 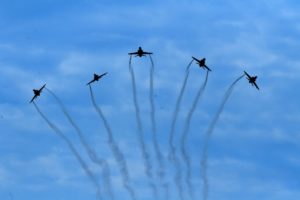 The police have made elaborate arrangements on both sides of the river to help the people witness the air show. Around 45 platoons of police and 100 officers along with an ODRAF team was deployed to ensure that the event pass off smoothly without any untoward incident. However, several people complained about the heavy traffic jam and parking issues on the roads led to the river bed.