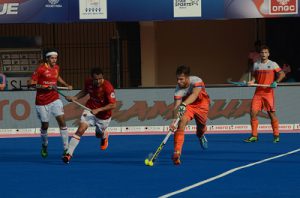 Bhubaneswar: The second day of the Hockey World League Final could well be called as a day of upsets. After World Number 1 Argentina were thumped by Belgium 2-3, Spain upset Netherlands in a similar fashion.

After opening their score through a penalty corner at the end of the first quarter, Spain doubled their lead in the 35th minute. A goal by Lars Balk off a penalty corner gave Netherlands a chance to come back in the game, but in a matter of couple of minutes, Spain’s Diego Arana hammered the third goal. Netherlands pulled another back in the 55th minute but couldn’t look for an equaliser.

Germany, looking for the equaliser, went for full attack, and managed to succeed in the 58th minute when skipper Martin Haner scored off another penalty corner.