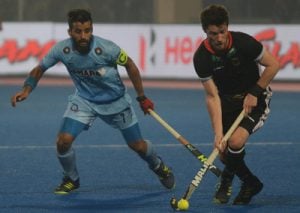 Bhubaneswar: India yet again failed to capitalise on its chances as it went down 2-0 against Germany in their last pool match of Hockey World League Final at Kalinga Stadium in Bhubaneswar. With this, India remain winless in the pool stage.

Though India stuck to strategy, working on counter-attacks, it received the first setback in the second quarter after German skipper Martin Haner netted a penalty corner with his team’s first shot on target at the 17th minute. Three minutes later, Mats Grambusch’s deflected effort deceived Indian shot-stopper Akash Chikte to double the advantage.

While India had chances in the third and fourth quarters, the German stood firm, thwarting all attacks.

India will face the winners of Pool A in the quarter-final.

In previous match, England and Australia drew the match 2-2 in their last pool encounter.