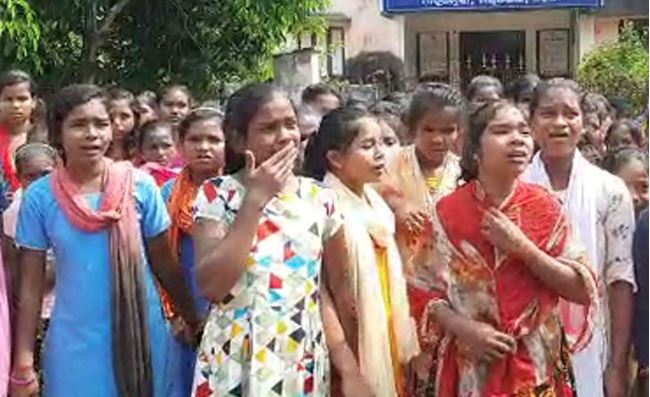 Baripada: In a heart wrenching incident, hundreds of girl students from a hostel knocked the door of Block office due to starvation, as they were not given food by their hostel staff in Thakurmunda area in the district headquarters here in Mayurbhanj of Odisha this morning.

The girl students have been identified as students of Scheduled caste and scheduled tribe girls hostel which is coordinated by Tribal Development Organization, said sources.

According to reports, this morning , as many as 94 girls students of the hostel were not given the breakfast meal.

Due to starvation and finding no other way to the situation, the students walked for one km to the Block office. And further reports also informed that, the girls were also crying out of starvation.

However, due to Sunday, the block office was closed and the students seated in front of the office to find solution for the mismanagement by the hostel administration.

Seeing the girls crying and sitting in front of the Block office, the local people enquired about their issues.

After knowing about the girl’s hardships, the local people provided some dry foods to the girls as they were ailing out of starvation.

After being informed about the incident, local Assistant Block Education Officer (ABEO), Commission on Rehabilitation Counselor Certification (CRCC) and Welfare Extension Officer (WEO) reached the spot and provided food and water to the girl students.

The girls had also complained regarding the mismanagement in the hostel premises. They had also added that the warden of the hostel commits irregularities in providing them food and sometimes they only provide rice and salt to eat, the girl students alleged.

Accordingly, since last night, as the cooking gas was exhausted, the management did not provide any alternative way and left the students with ailing hunger.

After hearing about the incident from the girls, the officials have initiated a strict probe against the hostel warden and people involved in this incident.

In the meantime, the local people were shocked to see such in-human negligence done by the hostel administration against the girls.