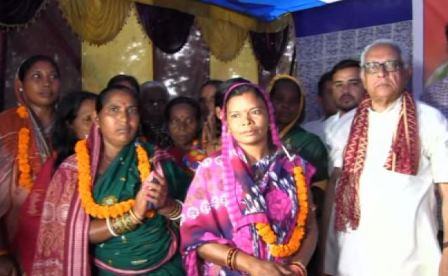 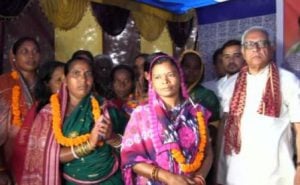 Bolangir: In a morale booster for the Congress, which has been plagued by infighting in the state unit for months, hundreds of members from BJP, BJD and AAP joined the party in the presence of senior leader Narasingha Mishra at the Congress Bhawan here on Sunday.

Workers of the three parties joined the Congress on the occasion of a special ceremony held here to mark the 73rd Birth Anniversary of former Prime Minister of India Rajiv Gandhi. Hundreds of workers from BJP, BJD and AAP reached the ceremony venue in a grand procession and were welcomed by Mishra into the party in the morning.

Notably, the joining ceremony was held as part of the ‘Judte Jao, Desh Bachao’ campaign of the Congress through which the party aims to strengthen its presence at the grassroots level.

Soon after the workers of other parties joined the Congress, Mishra said; “A number of workers from BJP, BJD and AAP were willing to join the Congress since long and their inclusion into the party fold, which remained a mere formality, was completed on the auspicious day of former PM of India Rajiv Gandhi’s birth anniversary today.” He hoped that after today’s joining process, the party would get strengthened from the bottom and would be able to give a good fight to BJP and BJD in the next election.