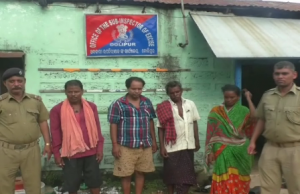 Jajpur: Tightening the noose around illegal liquor merchants in the district, Excise Department sleuths raided around half a dozen places in the district and seized a huge cache of country and foreign liquor. Three men and a woman were also taken into custody during the raid.

According to information, the Jajpur Excise Department, which had put several liquor vending units in Sukinda and Jenapur police limits under surveillance over the last few days, conducted simultaneous raids at six places today morning based on credible information. During the raid, the officials seized huge consignments of country liquor ‘Mahuli’ as well as packs of foreign liquor from these units operating illegally.

Informing on the raid, Sabita Sahoo, Excise Inspector, Jajpur Road, said raids were conducted on outlets located at Mangalpur, Bhalukantia, Gobarsahi in Sukinda and Balisahi under Jenapur. She added foreign liquor packs were mostly seized from the Balisahi area.

The total cost of the liquor consignments seized today would be around Rs 60,000, said Excise Department sources.

The four arrested were forwarded to court in the afternoon.