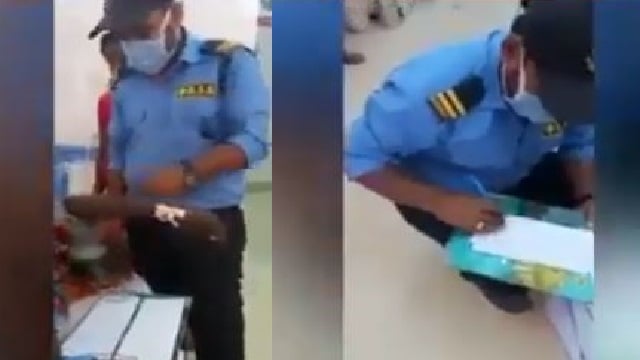 Balasore: A shocking video of a hospital security guard treating the patients at the Nilagiri Sub Divisional Hospital of Odisha’s Balasore district has gone viral on social media platforms.

In the viral video, a security guard, who has been identified as Sadananda Mukhi, can be seen going from bed to bed and measuring the blood pressure (BP) of the indoor patients.

According to reports, the incident is said to have occurred on November 6 when the doctor who was on duty allegedly asked Sadananda to measure patients’ BP. The incident came to the fore after a video of the incident went viral on different social media platforms.

Another lady security guard also can be seen in the viral video attending to the patients.

When contacted, the concerned security guard did not give a satisfactory answer over the incident while the doctor, who had allegedly engaged him in the work, did not answer the phone call.

Meanwhile, the incident of the security guard treating the patients at the Nilagiri Sub Divisional Hospital has been condemned by people from all walks of life. They raised questions about the healthcare facilities and demanded action against the concerned doctor and security guard.

2023 MG Hector gets a launch date in India, Know what to expect

Get a Google Pixel 7 under Rs 40,000 only on Flipkart, Check the offer here