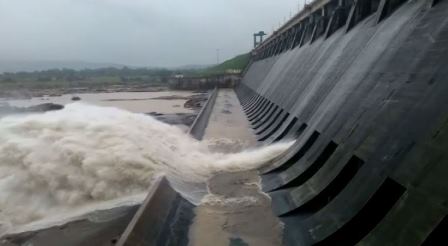 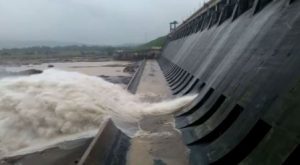 Sambalpur: To keep the water level under manageable limits, Hirakud dam authorities opened one sluice gate in the reservoir on Sunday night. The decision was taken after the upper catchment areas of the dam received heavy inflow of water due to incessant rains in the last 24 hours.

Depending on the quantity of the water in the reservoir, more gates may be opened in the near future, informed the dam authorities. It had earlier been decided to open the gate on Sunday morning, but was later deferred itill 2 am. Currently, 70836 cubic feet of water is entering the reservoir every second against a discharge of 45426 cubic feet every second, informed dam authorities.

The sluice gate was opened after the dam authorities formally communicated the district collectors of the downstream areas about it and locals were told to not venture into the river during the water release.

Meanwhile, the water level in the dam stood at 629.79 ft when the report was being filed.