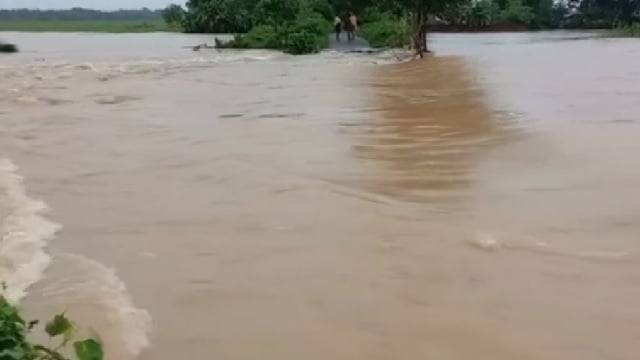 Bhuabneswar: The heavy rainfall across Odisha has caused severe issues in various areas of Cuttack and Dhenkanal districts. Many villages in these two districts have cut off from the nearby areas after breach in embankment of rivers.

Reportedly, two villages in Athagarh block have cut off from mainland after breach in embankment of Kantia river. The water is flowing at 4 feet over Cuttack-Sambalpur road. Besides, flood water has also entered Nidhipur Gada resulting in communication disruption in the areas.

Similarly, a river flood has occurred in Ramial river and its branches of Dhenkanal district due to which the water level has increased. As a result, three villages including Jeypore, Malpura and Dadhisingha have been cut off from the nearby areas. The main road of Jeypore village is flooded with over six feet flood water and have inundated. Over three feet of flood water is flowing from Masania till Nava Bharat chhak on National Highway 55.

Yellow warning issued for thunderstorm in 15 districts of…

Yellow warning for thunderstorm issued to these districts of…

The National Highway 53 near Siarimalia at Kamakhyanagar has washed away due to incessant rains triggered by the deep depression over the Bay of Bengal.