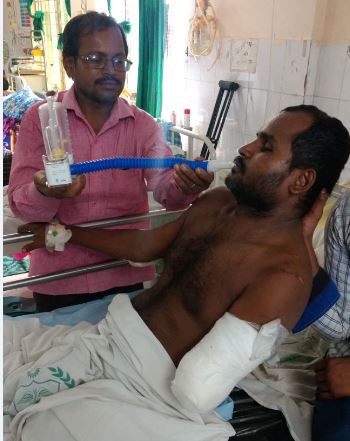 Bhubaneswar: Dilip Sahu was born blind, but never begged for a living like many physically challenged people do. Though he had to strive hard to run his eight-member family, he lived with dignity until misfortune struck him on July 3, 2017.

On that fateful day, Sahu, who is well-known as Divyang singer, had a train accident while trying to save his mobile phone from a robber at Balasore Railway Station. He slipped into the railway tracks after being shoved by the miscreant. The train ran over him chopping his left hand and leg adding to his woes.

“I was in Balasore to sing in a ‘Bhajan’ programme organized on the occasion of Bahuda Jatra of Lord Jagannath and his siblings. After performing there, I boarded the train to return to Bajapur village in Jagatsinghpur district, my native place. But life had something else in store for me. I lost my leg and hand while saving my mobile from a robber who pushed me from the platform to the tracks and a train ran over me and I landed in hospital,” said the 32-year-old Divyang singer.

Initially he was admitted to the Balasore district headquarters hospital but was later shifted to the SCB Medical College hospital in Cuttack. But as his condition began to worsen, he was shifted to the Bhubaneswar based-KIMS hospital where he is now undergoing treatment.

After coming to know about the financial problems of Sahu, the KIMS authorities decided to provide him free treatment. But, he badly needs some money to buy medicines.

Some of his Divyang friends have come forward to show their solidarity with whatever little money they had and now they have begun begging to save him.

Sahu, who had passed Plus Two from Ravenshaw College and Plus Three with History Honors from SVM College in Jagatsinghpur, was the sole bread earner of his family.

His family members are not able to afford his treatment as his parents are too old enough to work. Though his wife, whom he had married last year, is keen to work and arrange money for his treatment, there is not a lot she can do since she too is visually challenged.

“He was the only bread earner of our family of eighth members. He used to earn a living by singing at some programmes and teaching in a school. But, now after this accident, I don’t know what will be his condition and our too as we are also getting older,” said a teary-eyed Shantilata Sahu, Dilip’s mother.

“We request the state government to bear the expenses of Dilip’s medical treatment and to provide him a house and a monthly pension that would help him to live,” urged Siva Prasad Panda, Dilip’s friend.

If you want to give him some financial assistance, you can send it to his bank account.