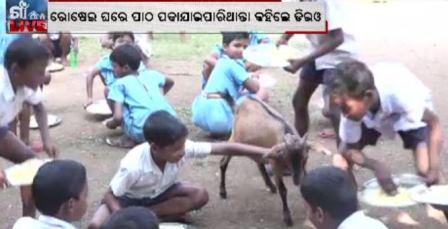 Keonjhar: In what can be considered as an act of vengefulness by the higher authorities, Headmaster of Jogeswar Nodal U.P School at Banua village in the district was suspended by the District Education Officer (DEO) in the wake of media report on goat eating students’ Mid-Day Meal (MDM).

According to reports, the DEO suspended Manas Ranjan Mishra, headmaster of the school, alleging that the teacher failed to disperse the animals and birds from the site while the students were taking their MDM.

A letter from DEO office said that the headmaster was placed under suspension with immediate effect for gross negligence in government duty and for violating Orissa government servant conduct Rule, 1959 under rule-15 of O.C.S (CC&A) Rule, 1962.

When asked, the DEO clarified that the teachers could have taken classes in the kitchen room of the school instead of conducting classes under the trees.

Earlier on Friday, Kalinga TV had highlighted the problems of the school. The roofless school buildings are in dilapidated condition that forced the teachers to conduct classes under trees inside the school campus. However, some goats were seen eating from the students’ plate.

Meanwhile, the locals protested the education officer’s decision alleging that instead of solving the problem of the school, the district authorities suspended the headmaster only to take revenge on him. They threatened to lock the school, if the HM’s suspension is not lifted at the earliest.