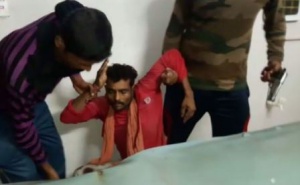 Cuttack: Notorious criminal Bhabagrahi Panda sustained bullet injuries on his legs during an encounter with police at Haridaposhi forest under Tigiria police limits in Cuttack district late on Monday night.

Acting on a tip off, a police team under the leadership of Officer in Charge (OIC) of Tigiria PS Susant Satapathy conducted a search in the forest. Realising the presence of policemen, Panda opened fire at the cops, who retaliated injuring him in the process.

Panda, who was carrying a reward of Rs 5000 on his head, sustained bullet injuries on his two legs. The OIC was also reportedly injured in the exchange of fire.

The wanted criminal was admitted to Athagarh hospital and later referred to SCB Medical College and Hospital as his condition worsened.

According to police, Panda used to mostly target businessmen and collect a huge amount from them as extortion money.

He has many criminal cases, including bombing and attempt to murder, at different police stations, police said.