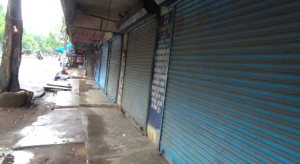 Baripada: Normal life came to a grinding halt across Mayurbhanj district on Monday due to a five-hour hartal call by BJD from 7 am-12 pm in protest against the recent steep fuel price hike. While vehicular movement was completely disrupted during the hartal, railway traffic remained normal.

Streets in Baripada town wore a deserted look as schools, colleges, other educational institutions, petrol pumps, shops and banks remained closed during the agitation. BJD workers were seen braving rain and pressurising people to support the agitation. Mayurbhanj remained cut off from the neighbouring districts as BJD supporters put up blockades on the NH 19 and NH 49 passing through the district by placing burning tyres on the roads.

The district administration had made ample arrangement of police force to avert any untoward incident during the hartal.

“We thank the people of Mayurbhanj for their overwhelming support to the hartal call given by BJD president Naveen Patnaik against the fuel hike bike Centre. We thank them for braving heavy rain and taking part in agitation. The BJD would continue its fight for the the cause till the Centre withdraws the dynamic daily pricing model for the fuel price hike,” said Jeetendra Mohanty, Mayurbhanj BJD president.