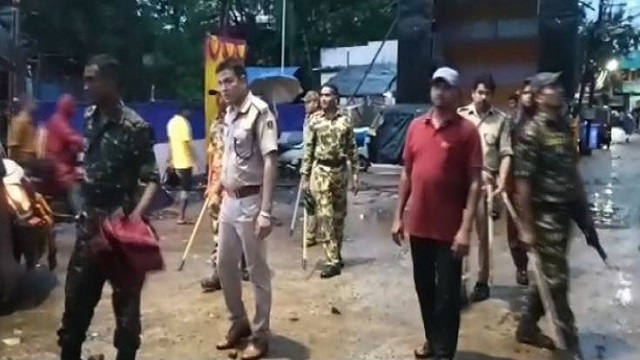 Cuttack: A clash between two groups broke out during Durga idol immersion, wherein both the groups pelted stones on each other near Badambadi area of Cuttack this evening.

As per sources, the clash occurred between members of Kusunpur and Bhagabatpur of Cuttack.

According to reports, both the parties had turf issues earlier.

However today, during the procession of the idols, both the parties had an altercation and soon the situation gave rise to a heated atmosphere.

Two killed in group clash over laying of water pipeline in…

As a result, a clash broke out between the two groups. Besides, both the parties attacked each other by pelting stones.

Soon, the Commissionerate police swung into action and took control over the situation.

One platoon of police force have been appointed on the spot and the situation is under control, informed by Cuttack Deputy Commissioner of Police (DCP) Pinak Mishra.

It is to be noted that in a similar incident of a group clash on September 18, as many as five persons sustained critical injury out of a total of ten persons who got injured due to a group clash in Bhadrak district of Odisha. The incident took place in the Ramapalli village under Chandbali Police limits of the district. Later,the Police reached the spot and pacified the people involved in the fight.