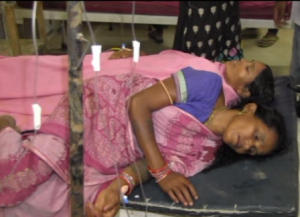 Bolangir: At least six persons including two women sustained critical injuries after a groom’s family was attacked by the hired goons of bride’s family for calling off marriage in Deogaon village under Tushura police limits in the district, last night.

The victim Madan Rana’s family in Kacharapalipada were left in a state of panic after a group of miscreants entered into their house in the evening and started attacking one member after the other with cudgels and sharp weapons leaving them critically hurt on the spot. The assailants left the spot immediately after the incident.

Locals rushed the injured to the Bolangir District Headquarters Hospital (DHH) and then shifted one of them to VIMSAR at Burla due to deteriorating condition.

Informing on the attack Madan Rana, who also sustained grievous injury  and currently hospitalized at Bolangir DHH, suspected it to be a handiwork of Balaram Rana’s family of Madanpalipada with which his family was into a dispute over cancelled marriage.

“I heard some of the assailants shouting and blaming me for cancelling my son’s marriage with Balaram Rana’s daughter during the attack. However, I could not be able to identify the attackers as they were masked,” said Madan.

Deogaon Police have reached the spot today morning and started investigation. However, nobody has been caught in the incident so far.