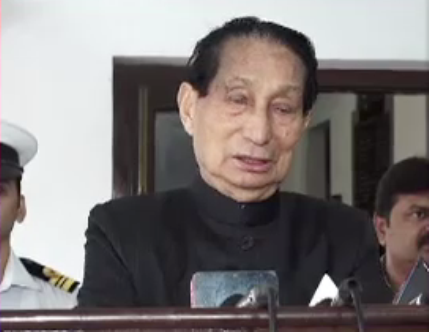 Bhubaneswar: A day after being admitted to Apollo Hospital here and media reports claimed that he had suffered a mild heart-attack, Odisha Governor SC Jamir has rubbished it on Friday and informed that he is perfectly alright and healthy.

In a video clip received by Kalinga TV, Jamir was found saying that he had visited the hospital yesterday for only a routine check-up.

“It is unfortunate that false news had been spread by media that I had suffered a heart attack. I came for a routine check-up only and my treatment would be completed by tomorrow,” said Jamir.

Naveen wished speedy recovery of the Governor and had a talk with the Cardiac Specialist of the hospital Dr PK Sahu who was treating him.

Dr Sahu had yesterday informed that all tests reports of the Governor were normal except a mild change in ECG for which he had been put under observation.

Speaking to media persons, Dharmendra said, “The Governor is normal and all the medical tests conducted on him have found him in good health”. Wishing Jamir a long and healthy life the Union Minister hoped that he would be released from hospital shortly.