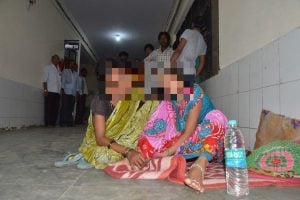 Lucknow/Gorakhpur: The Uttar Pradesh government has warned stringent action against those responsible for the series of deaths of children at the Baba Raghav Das Medical College and Hospital in Gorakhpur over the last few days. The toll had reached 63 at last count.

On the orders of Chief  Minister Yogi Aadityanath, Health minister Sidharth Narayan Singh and Medical education minister Ashutosh Tandon have rushed to  Gorakhpur to take stock of the situation and take remedial measures.

As many as 63 children, including many newborn babies, have died in the last five days at the government-run hospital here in Uttar Pradesh. There is, however, confusion over the reason for the large number of deaths with initial reports suggesting that the children had died because of shortage of liquid oxygen and the state government denying such reports.

“The Chief Minister was not informed by the doctors and officials about shortage of oxygen neither on July 9 nor on August 9,” Singh said in Lucknow before leaving for Gorakhpur..

“The shortage of oxygen was not highlighted. The medical education minister was also not briefed about it. Appropriate action will be taken keeping these points in mind and a probe will be done,” he said.

A delegation of Congress leaders under the leadership of leader of opposition in Rajya Sabha Gulam Nabi Azad visited the hospital and met the victims’ families. “Heart-wrenching incident. Saddened by children’s death. This happened due to state government’s carelessness,” Azad told media persons outside the hospital.

Incidentally, Gorakhpur was Adityanath’s parliamentary constituency before he took charge as the Chief Minister of the state.