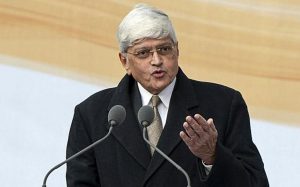 72-year-old Gandhi’s name was selected during a high level meeting held at the Parliament House here in the national capital convened by the Congress President Sonia Gandhi.

Polling for the Vice President’s post will take place on August 5. The votes will be counted the same day.

The Electoral College, consisting of elected and nominated members of the Rajya Sabha and Lok Sabha, votes for the Vice President.