Goods-laden truck collides head on with auto-rickshaw in Balangir, 2 dead 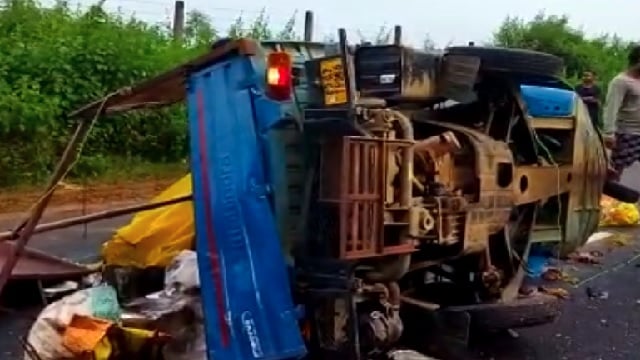 Balangir: In a tragic incident, a good-laden truck has collided head on with an auto rickshaw on National Highway 26 near Luhurapali chhak under Saintala Police limits in Balangir district in which two people have been killed while two have sustained injuries.

Reportedly, the good-laden truck was en-route to Kalahandi from Balangir whereas three people were travelling on the auto to sell sweets.

The locals immediately informed the local police and tried to rescue the injured people. On getting the information, the local police arrived at the spot and rushed all of them to District Headquarter Hospital (DHH) by 108 ambulance.

The doctors pronounced two of them brought dead while two others are in critical condition.

Meanwhile, the enraged locals have blocked the roads demanding compensation for the family who were killed in the road mishap.