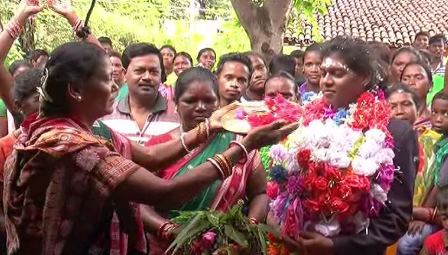 Sundergarh: Bonita Lakra, who clinched gold in the recently concluded World Police and Fire Games-2017 in Los Angeles, was given a warm welcome by the people of Katanga, her native village under Kutra Block of the district, on Monday.

The enthusiastic villagers welcomed Lakra, the pride of the village, state and India as a whole, with a band and loud slogans in her name. They also marched in a procession through the village.

Bimala Lakra, mother of Bonita, received her golden daughter traditionally by applying tilak on the latter’s forehead and lighting incense sticks for her.

Bonita, who works as a constable in the Commissionerate Police, was part of the Indian women’s police team which bagged gold in 4X100 metres relay race.

The woman athlete of Odisha Police also clinched silver in the 100 metres flat race and bronze in 100 metres hurdles in the women’s category.

“I am very happy that on my first participation abroad was successful and I bagged the medals. I will participate in the 2019 World Police and Fire Games in China and will get gold for the country. All credit goes to my parents, who have made a lot of sacrifices to bring me up to this stage,” said Bonita.

Lakra also narrated her mental agony saying, “I feel disappointed due to the economic condition of my family, which sometimes affects my performances. I would give my full attention to doing well if I get some financial support.”

“We are extremely happy that our labour has now bore fruits. We had never expected that she would participate in any International championship. We are very proud that she has won four medals for the country,” said Bimala, tears in her eyes but a smile on her face.

Bighnaraj Miridia was the other Odia policeman, who won gold in 400 metres flat race in the championship. Bighnaraj, who is a Lance Naik at 6th OSAP battalion, Cuttack, also won bronze in 400 metres hurdles in men’s category.

Both the athletes of Odisha police were earlier selected by the All India Police Sports’ Control Board to represent the country in the World Police Games.