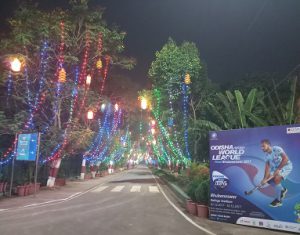 Bhubaneswar: Come Friday, and all the gates will lead to one venue – the Kalinga Stadium, which will host the prestigious Hockey World League Finals.

With eight of the world’s best teams in attendance, this would be the third major event (second in hockey) to be held in the revamped stadium. While the Stadium hosted the Hockey Champions Trophy in 2014, it hosted the very successful Asian Athletics Championships a few months back.

The stadium, which will also host the World Cup in 2018 has been decked up well for the event. The under-construction portions have been covered up by banner to give audience a complete feel.

The opening day will have a cultural event followed by the opener between Germany and England. In the second match of the day, hosts India will lock horns against the Aussies.

Speaking to media ahead of the crucial game, Skipper Manpreet, who will also play his 200th match tomorrow, is ready for the challenge.

“It has been a long journey. I am excited because I will be playing in front of the home crowd. The support will be there. We are hopeful of a good show,” he said.

A total of 22 matches will be played in the tournament which will end on December 10. India is placed in Pool B with Australia, England and Germany.