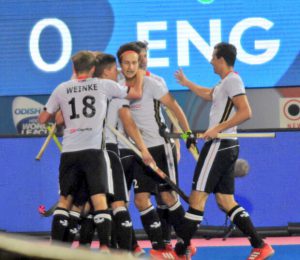 Bhubaneshwar: Germany started their campaign at the Hockey World League Final 2017 with a thumping victory over England at the Kalinga stadium here in Odisha on Friday.

In the inaugural match, Germany defeated England 2-0. The first quarter ended in scoreless, however in the second quarter Germany displayed their superiority. Mats Grambusch scored the first one in the 19th minute, while Christopher Ruhr scored the second goal for Germany.

In the third and the fourth quarters, Germany played attacking game but couldn’t convert the close chances. Grambusch received the Man of the Match award.

“We are happy with today’s performance, but we missed a lot of chances. We need to get better,” said Ruhr.

On the other hand, England coach Russell Garcia said, “We started well, but couldn’t keep the energy going. We didn’t give Germany too many chances. Had we got the penalty corner in the last sox minutes, things could have been interesting.”

England will next play against India. “We are excited and looking forward for that match. It will be a great experience for the young guys to play in the noise. We are motivated to do well, ” Gracia added.