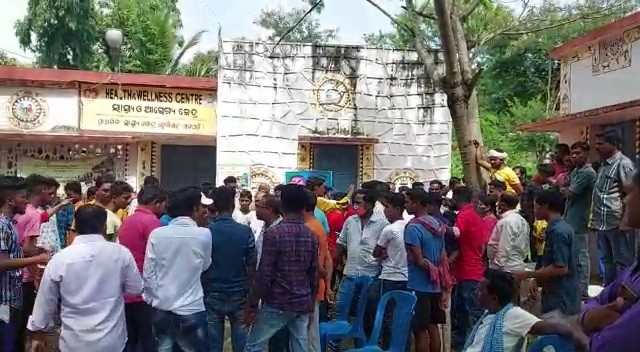 Mohana: The locals locked the Chheligarh Community Health Centre (CHC) under R Udaygiri block of Gajapati district in Odisha on Saturday complaining arbitrary behaviour towards medical staff and people by the pharmacist of the CHC.

It is to be noted that people of about 50 nearby villages including Chheligarh, Abarsingh and Randiba depend on this CHC to get treatment for different health related issues. However, as the appointed doctor often remains absent from duty, the pharmacist behaves arbitrarily, they complained.

It has further been complained that the Pharmacist seeks money for treatment and also misbehaves. And, although the locals have raised the issue before the higher authorities, nobody paid heed to the issue. And hence finally they decided to lock down the CHC, they said.

Mutilated body of old man recovered from pond in Odisha’s…

On the other hand, the appointed doctor has said that since the pharmacist has occupied the government quarter that is meant for the doctor and also misbehaves medical staff, he is remaining absent from work.

However, the pharmacist has denied all allegations levelled against him by the locals.