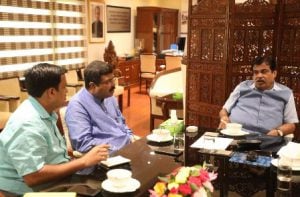 Gadkari will be laying the foundation stone of the bridge, a long standing demand of the people of  a the Steel City. The first one, built way back in 1961, is in a dilapidated condition making movement of vehicles hazardous.

The Ministers also reviewed the progress of other infrastructure projects of the National Highway Authority of India (NHAI) in Odisha.

The decision to build a second bridge over river Brahmani was announced by Prime Minister Narendra Modi during his Rourkela visit in April 2015.

Local MLA Dilip Ray, who had been vocal about the delay in the project, will also remain present during the ceremony along with several other leaders.