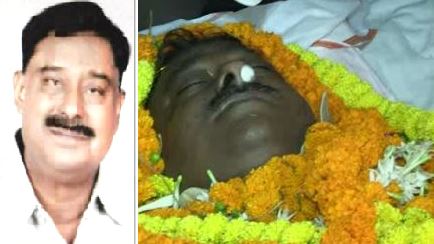 Balasore: Noted journalist and founder-editor of Odia daily “Ajikali” Bismoy Kumar Mohanty, who died following a heart attack in Puri on Sunday, was cremated at his native village Saradanga under Khaira block today. He was 62

A large number of journalists and people from different walks of life paid their last respects and offered floral tributes before Mohanty was cremated.

Mohanty, who had a prolonged kidney disease, was taken to Puri hospital after he complained of chest pain yesterday morning. He breathed his last while undergoing treatment. He was on a vacation in the pilgrim Town along with his wife Bijay Laxmi Mohanty.

Born on February 2, 1957 in Saradanga, Mohanty was the president of Odisha Small and Medium Newspaper Association. He was also associated with a number of social and cultural organisations.

He was also into politics and had joined the Congress during his college days. He was the district present of Chhatra Congress and Youth Congress.

“Ajikali”, the newspaper founded by Mohanty, is being published from Balasore.

Mohanty is survived by wife, who is also publisher and editor of language daily “Sambad Bahika”, son and daughter.

A pall of gloom descended on media circles in the state following his untimely death.