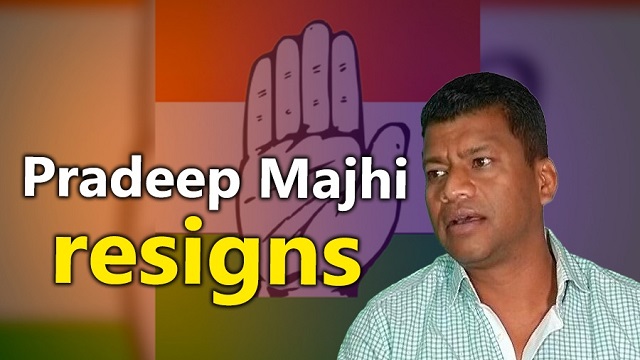 Bhubaneswar: Former Member of Parliament and Senior leader Pradeep Majhi has resigned from National Congress party today. According to sources, he is likely to join Biju Janata Dal (BJD).

Earlier, he stepped down as the vice president of OPCC on moral grounds for party’s debacle and continued to be the president of ST Cell of the party and work for the tribals. Reportedly, AICC Vice-President Rahul Gandhi discovered him under the Youth Congress ‘Talent Search for Youth’ conducted in Bhubaneswar where he stood first in the state level. Pradeep Majhi began his political career as elected President of Zilla Parishad from Nabarangpur. He was nominated by the Congress party to contest the Lok Sabha elections 2009 from Nabarangpur in Odisha. He won the 2009 Lok Sabha election by a margin of 30830 votes.

Majhi has written a letter to the President of Pradesh Congress Committee (PCC) Sonia Gandhi regarding his resignation.

“With profound respect and obedience I beg to state with extreme sad and pain that I have decided to resign from the primary membership of Indian National Congress. I joined Indian National Congress party with utmost enthusiasm with a view to serve the needy people, accordingly the party also provided ample opportunity and placed me at the top of others without any demand from my side,” read the letter.

“I enjoyed the respective position and gained love and favour of the general public. The organization of the party was extremely well managed by your dynamic leadership which gradually declined due to recalcitrant persons occupying the pivot posts at different level and now the party has almost lost its credibility which may take a long time to revive,” also read the letter.

“I have a great desire to serve my people at whatever position I am which is now lacking in the Congress party. As such I am painfully quieting the party for which I may kindly be excused. I
shall however will perform my duties as per your ideology and serve the people with utmost satisfaction,” further read the letter.

Majhi, who represented Nabarangpur Lok Sabha seat from 2009 to 2014, was seen as a prominent tribal leader of Congress in Odisha and as a strong youth leader. Although he lost the 2014 and 2019 parliamentary polls from Nabarangpur to Balabhadra Majhi (BJD) and Ramesh Majhi (2019), Majhi is known to have considerable support in Nabarangpur and Malkangiri districts.