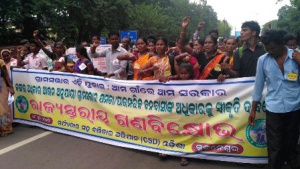 Bhubaneswar: Hundreds of tribals and forest dwellers under the banner of Campaign for Survival and Dignity (CSD), gathered at Master Canteen square to protest the State Government’s apathy in implementing Forest Rights Act (FRA).

The rally commenced from Master Canteen square and terminated at Lower PMG where a public meeting was organised. The protesters alleged that the Odisha Government was violating the Forest Rights Act.

“The protest march has been organised to protest against the Forest Department for doing plantation on occupied forest lands in different districts and for launching anti-FRA schemes like Áma Jungle Yojana,’ ‘Banayana’,” said Gopinath Majhi , Convenor of the Forum.

The protesters also submitted a Memorandum to the Governor of Odisha SC Jamir. Many forest rights activist including Anna Kujur were present at the protest rally.