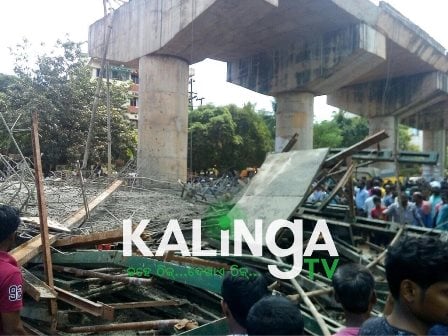 Bhubaneswar: One person was killed while over 20 others, including a minor girl, were injured as a portion of an under construction flyover at Bomikhal in Bhubaneswar collapsed on Sunday.

The deceased has been identified as Satyabrata Patnaik (40) of Jharpada. The flyover collapsed while he was returning home along with his daughter Sheetal. The minor has been shifted to AIIMS from Capital Hospital after her condition deteriorated.

Chief Minister Naveen Patnaik has announced a compensation of Rs 5 lakhs for the kin of the deceased; all the medical charges of the injured are to be taken by the state government. A high level probe has been ordered by the CM into the mishap.

According to an eyewitness, the flyover caved in while more than 30 labourers were working on the 30-40-feet flyover. Many locals claimed that the mishap took place due to the poor quality of work.

A team of fire fighters and Odisha Disaster Rapid Action Force (ODRAF) rushed to the spot and rescued three persons and admitted them to the Capital hospital. At least 10 people are being treated there.

Bhubaneswar DCP Satyabrata Bhoi also went to the spot to take stock of the situation.

“Two senior engineers have been asked to visit the spot and conduct a detailed inquiry into the incident. Action will be taken against those found guilty,” said Works Secretary Nalinikant Pradhan.

The rescue operation has been affected due to the massive crowd on the spot. However, efforts are on to rescue the trapped persons with the help of cranes and locals.

The death toll in the accident is likely to increase as many have been injured severely.