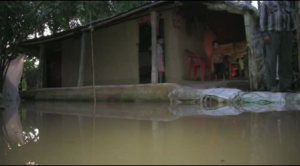 Bhadrak: In a minor respite for villagers across Bhadrak district, the water level in river Baitarani, which was in spate for the last couple of day compelling the administration to shift hundreds of people to safer places, started receding on Friday.

There was, however, no respite for the neighbouring districts of Jajpur and Kendarapara with Special Relief Commissioner (SRC) Bishnupada Sethi issuing a directive to the Collectors of these two districts to remain alert in view of threar of floods following release of water from the Rengali dam on River Brahmani.

Briefing media persons on the flood situation in the State this morning, Sethi claimed that the water level in river Baitarani was on the decline prompting people in several villages of Bhadrak district to return to their homes. He, however, added that the district administration was watching the situation closely.

In a communication to the Collectors of Jajpur and Kendrapara districts earlier today, the office of the SRC asked them to remain alert with the fear of floods looming large in blocks like Bari, Binjharpur, Aul and Rajkanika after Rengali dam opened two more gates today taking the total number of gates opened to 10.

Similarly, flood situation remains grim in Balasore district with around 20-30 villages still inundated in Baliapal and Bhogarai blocks after floods in Subarnarekha river. Water level remained at 11.31 meters in Subarnarekha till today morning, according to a report.

The administration has made arrangements to shift people to safe places and supply them with cooked food.